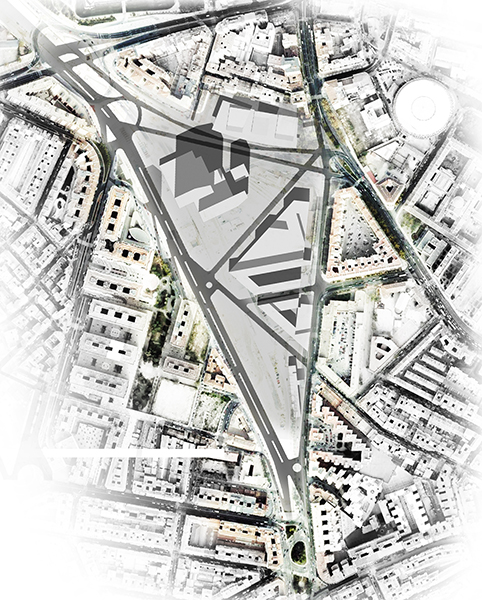 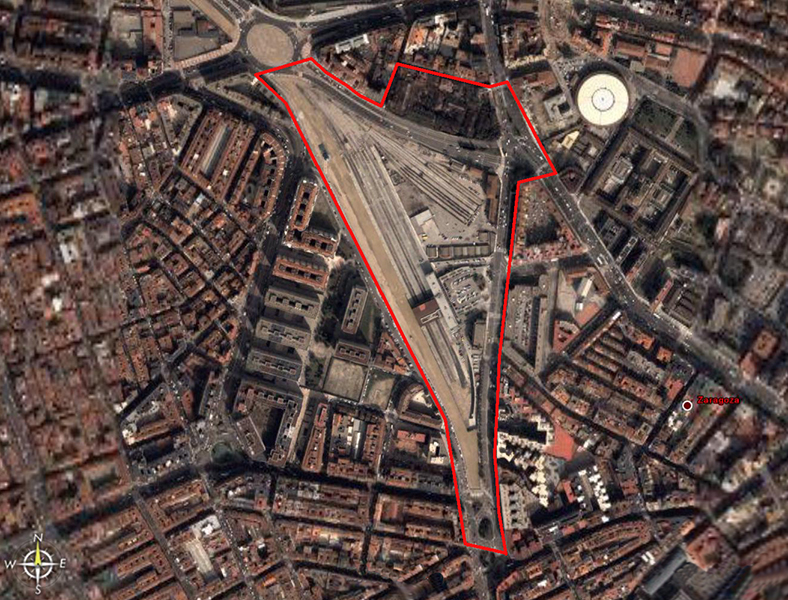 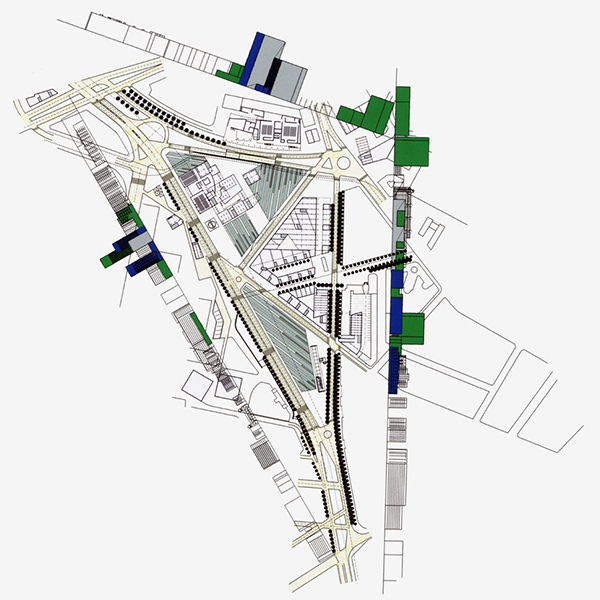 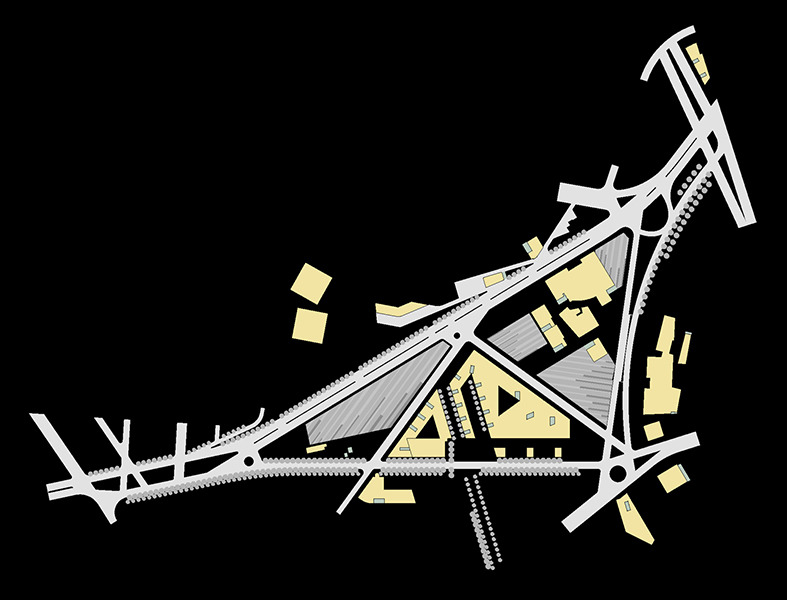 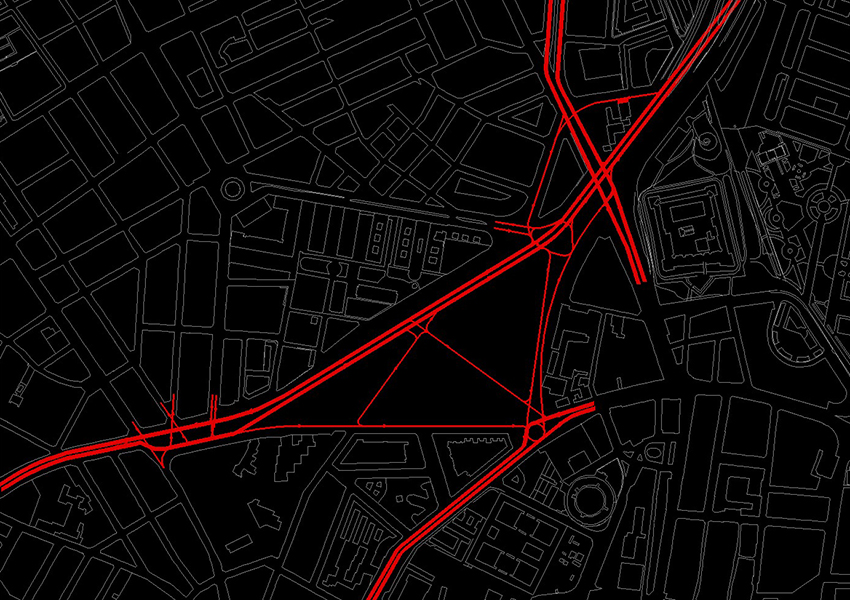 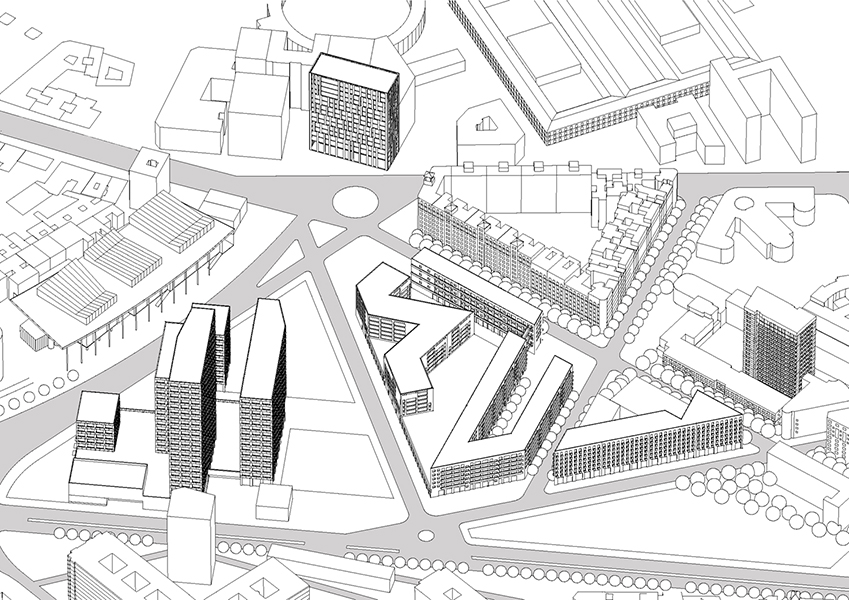 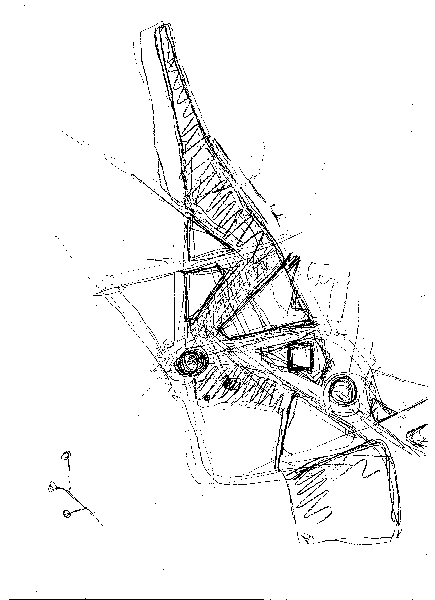 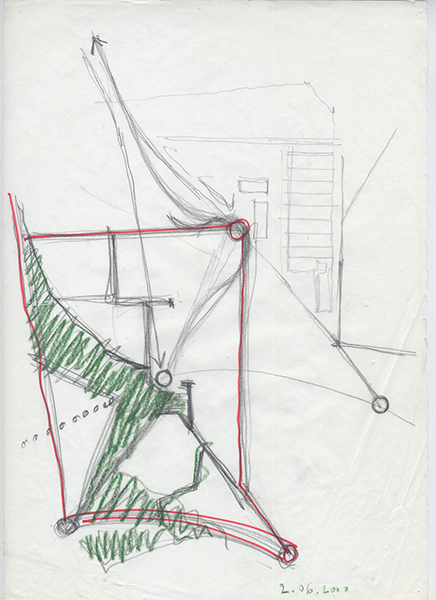 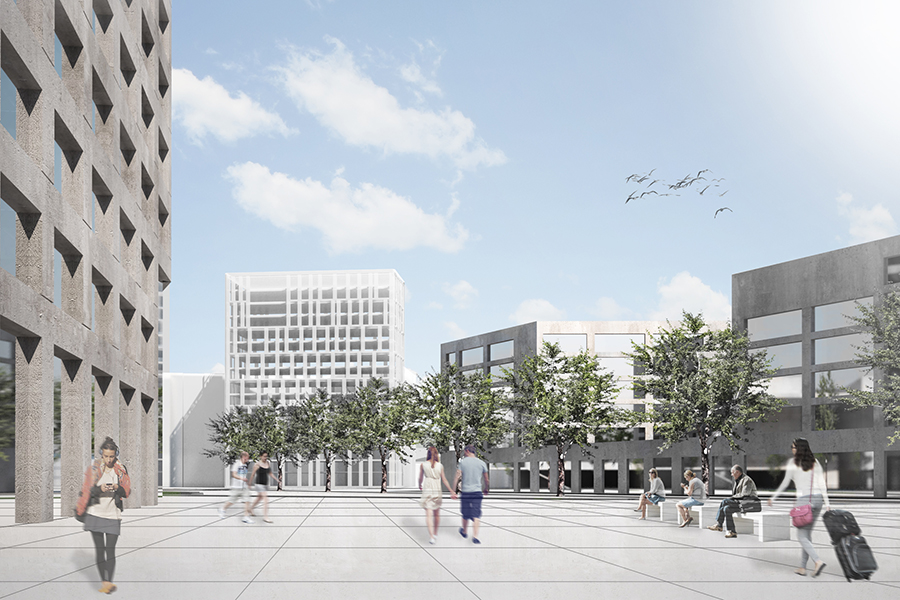 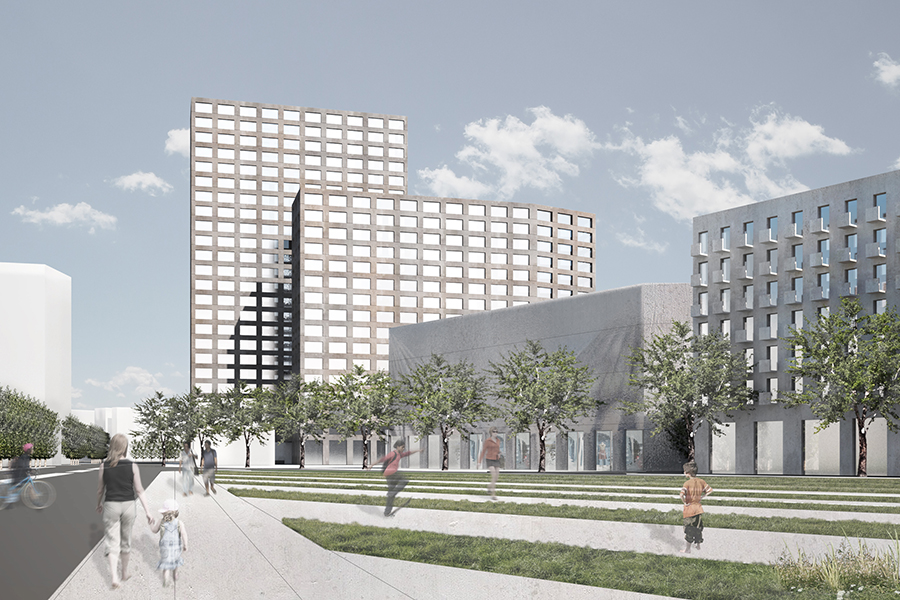 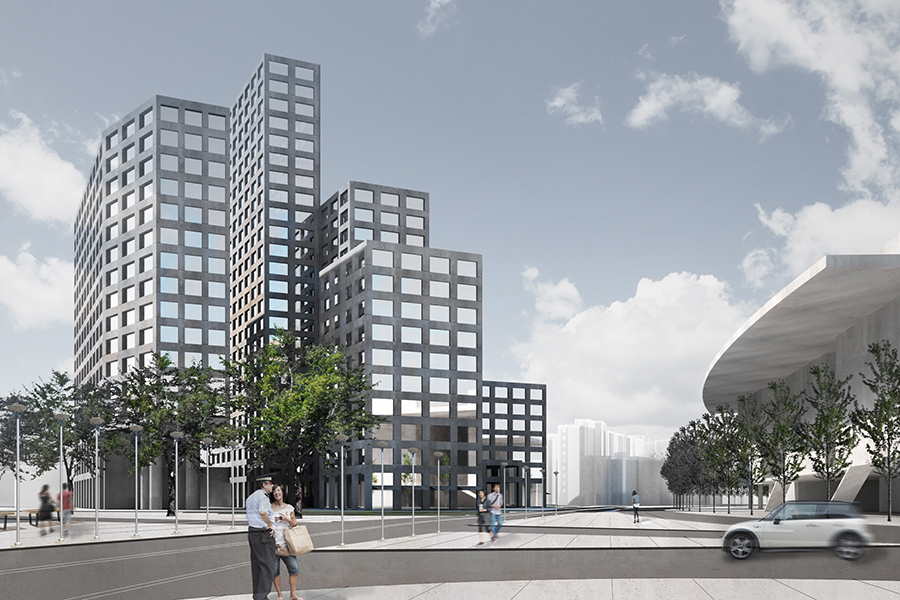 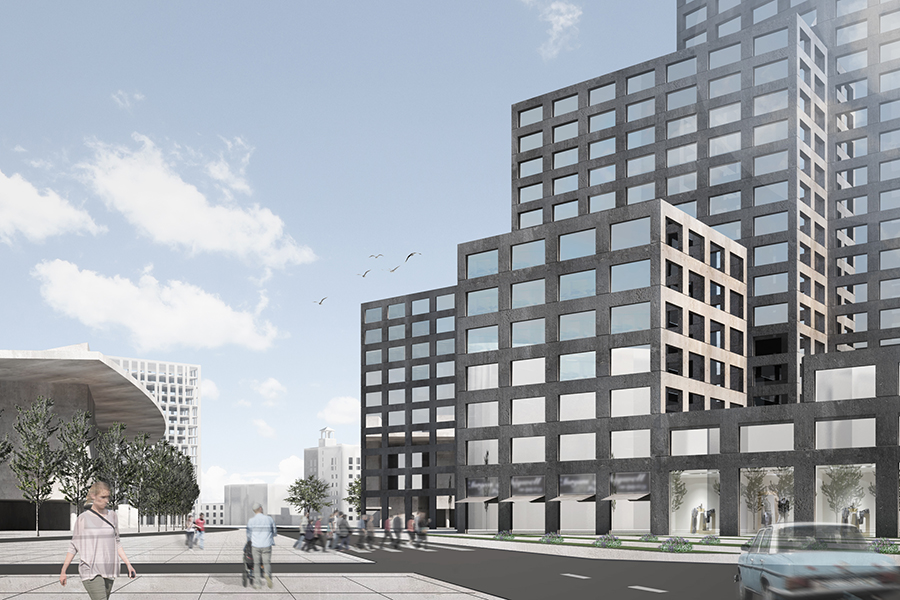 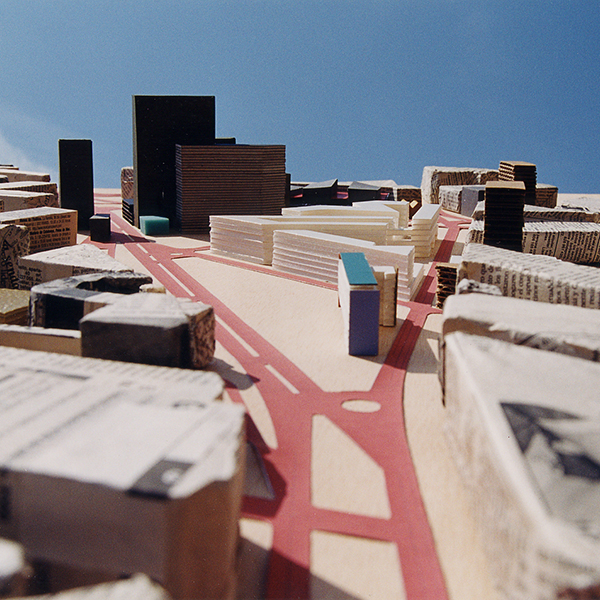 DEVELOPMENT OF THE PORTILLO AREA. SARAGOSSA

The disappearance of the El Portillo railway station leaves a large urban space in the centre of Saragossa. This space is defined by strong compact fabrics, which at different times in the city’s growth have become poorly permeable areas, precisely because of their location in an edge area opposite the barrier created by the railway.

The empty area arising from the removal of the railway tracks is a space subject to the clearly defined boundaries of the Parque de Roma and El Gancho neighbourhoods, formed by the backs of high-rise buildings, which restrict the chance of obtaining distant views to a few very localised areas. This space is actually perceived from shorter distances and especially from within the empty space. The most important formal potential of the station space is the set of parallel tracks, which extends in the direction of traffic in the railway corridor, and which creates an open expanse, which is the boundary between different urban fabric structures.

In this process of transformation, two decisions have been taken regarding the area that are the undisputed starting point of any proposal: to cover the railway tracks, maintaining the railway corridor in its current position, and to transform the nature of the link between the A-68 road and the traffic distribution system in Saragossa. In the proposal presented, these two structural decisions are complemented by the construction of a new avenue over the structure of the railway tunnel. The new avenue precisely follows the route of the railway on the ground and as a pacified traffic route, reconnects the Exposición and Goya avenues. Its layout defines the unitary slope capable of providing maximum consistency on the various levels at which some of the real estate activities that make up the surrounding area take place. This prevents the segregation of separately managed areas of land.

In a city with a considerable potential for development, the regeneration of an urban empty space is an opportunity to remake an urban area, reconnecting incomplete connectivities and creating a new pole of activity in a privileged position. The aim is to make this space an area of new centrality, based on the recognition of the empty space as an asset to be addressed and emphasised in the search for new urban images. How this empty space is addressed will determine its proportion, which will be recognised by the pieces that establish the precise scale, in terms of the free space to be created, but also in terms of an overall global – almost geographical – understanding of the city as a whole. It is therefore within the alternative of adding buildings to the empty space and the ability to reconfigure its closed and impermeable edges where the new architecture will have to find its own narrative in the interplay of volumes under the light, in the integration of scales and infrastructures and in the treatment of the free space, rather than in the singular nature of the programmes, which were not defined in this tender process, or in the formal virtuosity of the constructed response.

The essentially triangular empty space is addressed by establishing markedly urban forms, that house probable programmes, aimed at centralising service and tertiary activities in this sector, which are able to make it stand out from other new poles of activity in Saragossa.

In any event, the activities area – 210,000 m² of built area for cultural, productive and leisure activities – is planned to be compatible with a certain degree of residential load, which contributes to the complexity in how the space is used, which is essential in the urban condition that is the objective.

THIRD PRIZE IN THE INTERNATIONAL COMPETITION OF IDEAS FOR PLANNING THE LAND RELEASED BY EL PORTILLO RAILWAY STATION, SARAGOSSA