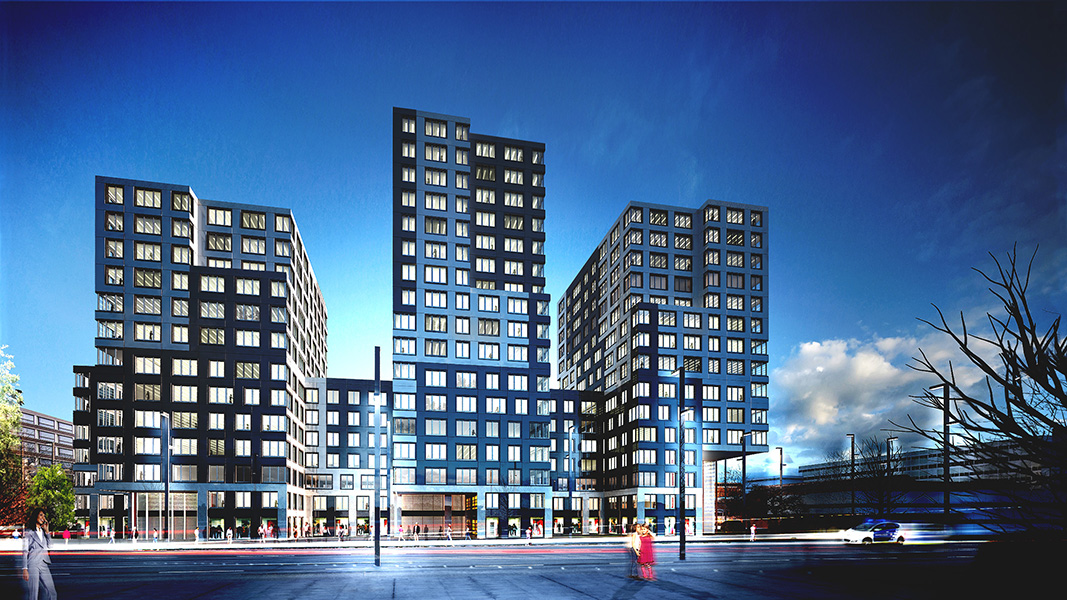 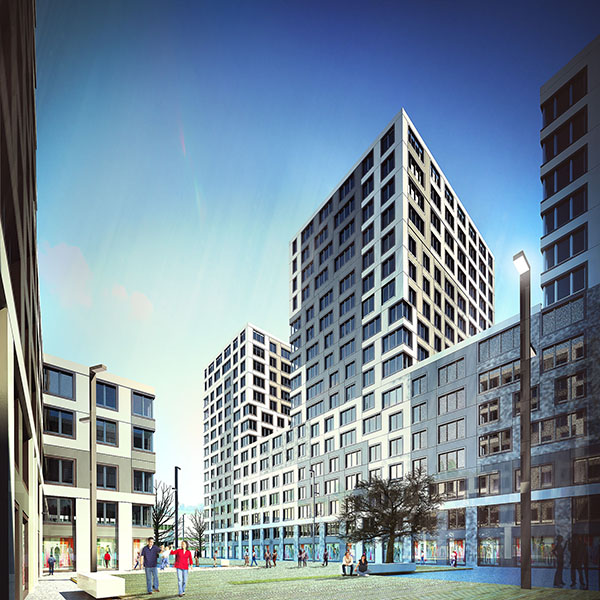 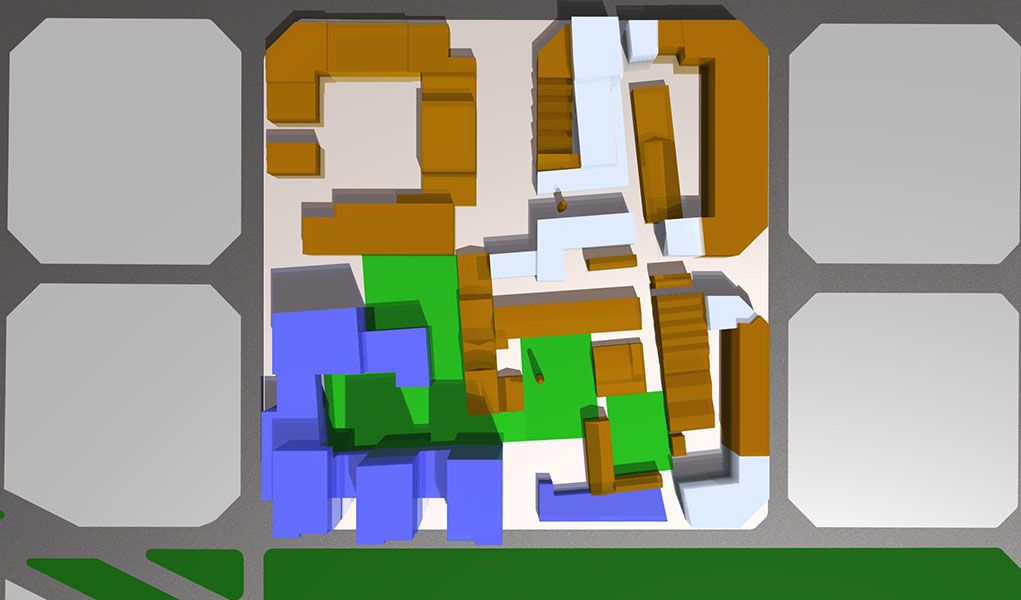 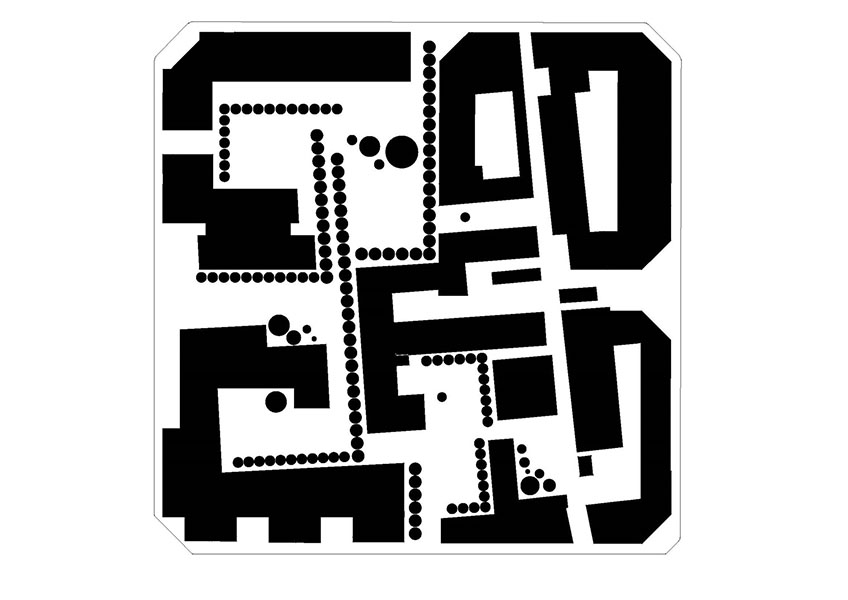 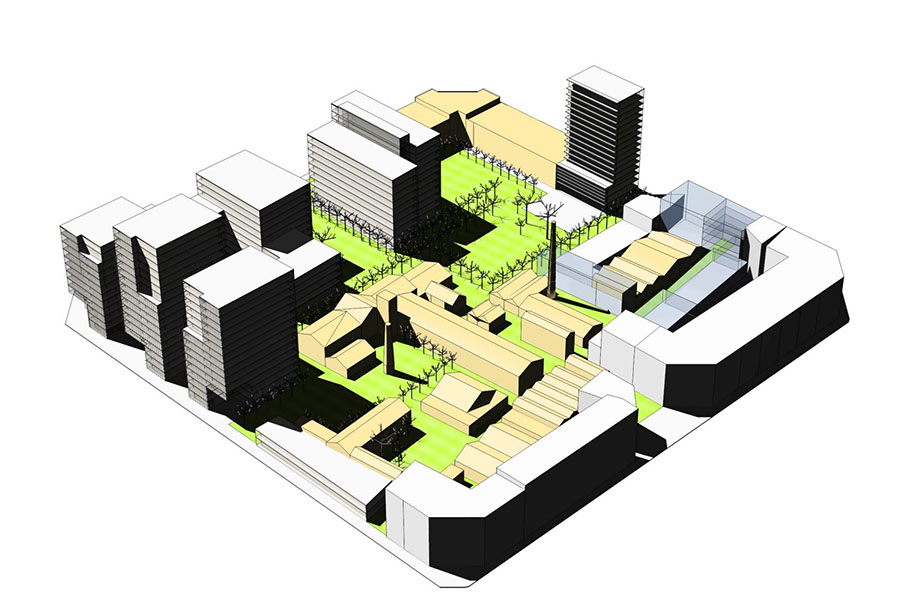 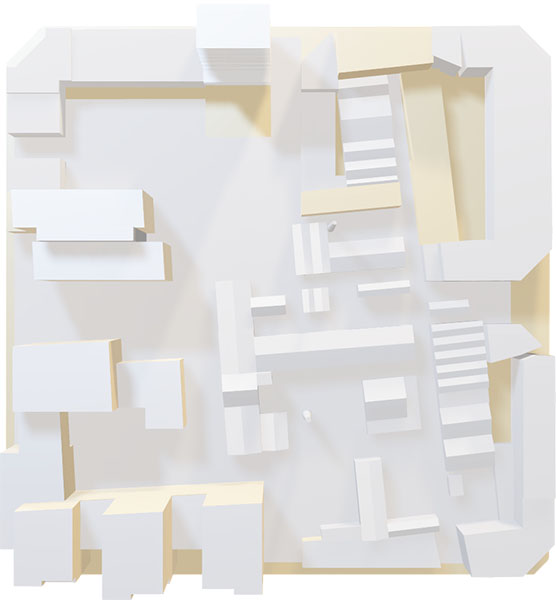 This office complex occupies one of the four blocks in the Can Ricart-Parc Central sector in Barcelona’s 22@ BCN district, adjacent to the protected historic area of the former Can Ricart textile factory, with a façade overlooking the Poblenou district’s new Parc Central.

The current planning states that the extensive listed industrial premises must be preserved, and makes the concentration of the planned floor area subject to the limited area on the ground. The plan aims to achieve a development that expressively exploits the tension between alignments arising from the provisions of the Cerdà Plan and the historical plot layouts of the rural land in the Poblenou district, as evidenced by the industrial buildings that have been preserved. The plan covers the four entrances of the two perpendicular streets that cross the superblock and which provide access to the complex interior system of free spaces. The starting points of these streets refer to the position of the new buildings in the Eixample grid plan, and set the high intensity buildings apart from the low-intensity buildings that make up the Can Ricart heritage buildings.

The block is organised around a continuous U-shaped building between three and five storeys high, which becomes the base from which three towers of heights between eleven and fifteen storeys rise, and these form the façade overlooking the Parc Central. On this side, the towers transcend the base and therefore appear to be independent volumes in their entire height.

The dimensions of the large buildings – between fifty and sixty-five metres tall and with built thicknesses of at least eighteen metres create volumes that appear to be heavy. This calls for the application of geometric resources to minimise the length of the vertical edges, which enable the visual breakdown of each building and make both the long and the side façades slimmer. In all the buildings, the plan stipulates strategic excavation of the edges, by means of hollows at different heights that lighten their volume.

Inside the open block created by the buildings, the free space has equivalent dimensions to those between the warehouses in the old industrial area. A unitary urban development of the system of pedestrian areas in the entire superblock is planned, which enhances the connections between them and fosters both the continuity of the walkway and the fragmentation of perspectives.

Technological solutions aimed at limiting and controlling solar radiation, facilitating natural cross-ventilation and eliminating thermal bridges are applied to the façades of the building in the complex. The solid parts made of GRC generally provide high levels of insulation. The glazed areas, with breathable façade technology, ensure both solar control and low emissions, as well as light control and the possibility of natural ventilation.

The energy source for the air conditioning and heating installation is the district cooling and heating system in the sector, with interchange and pumping systems in the basement, and zoned fan-coils of ducts to each floor with four-pipe systems. This enables both scheduled discrimination of services based on demand, and an enthalpic recovery system in the primary air circuits in the roof. The recovery and treatment of grey water and rainwater is planned in all the buildings, as well as the installation of photovoltaic sensors on the roof.