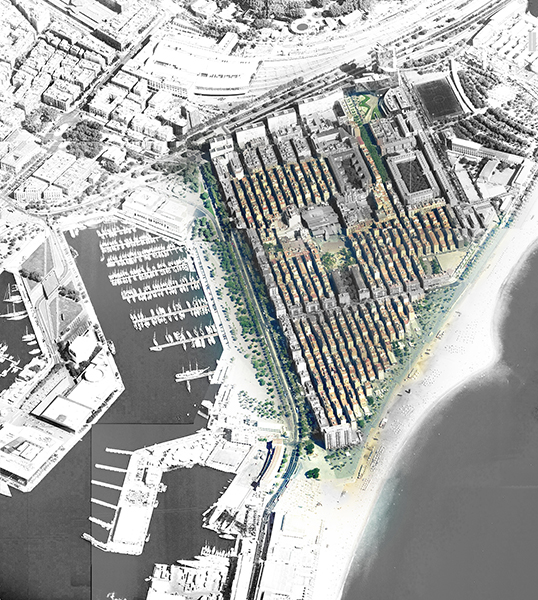 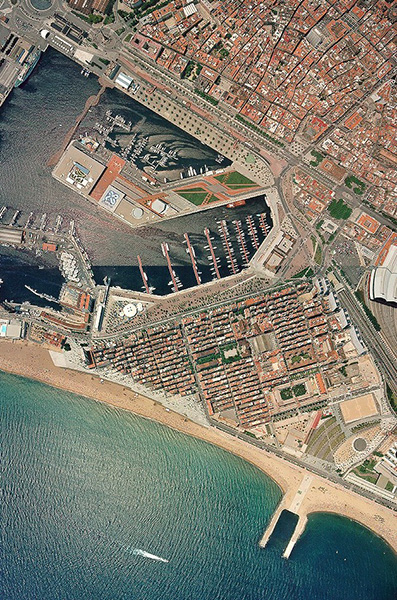 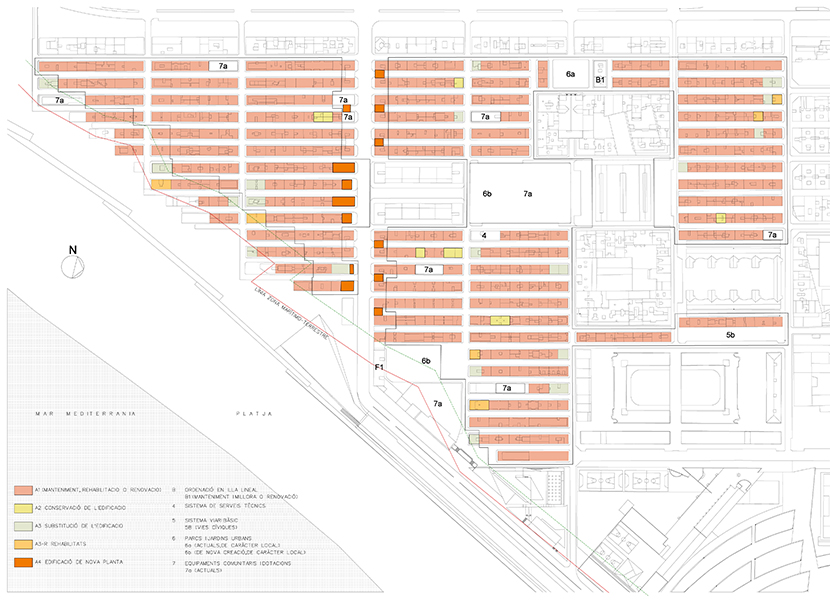 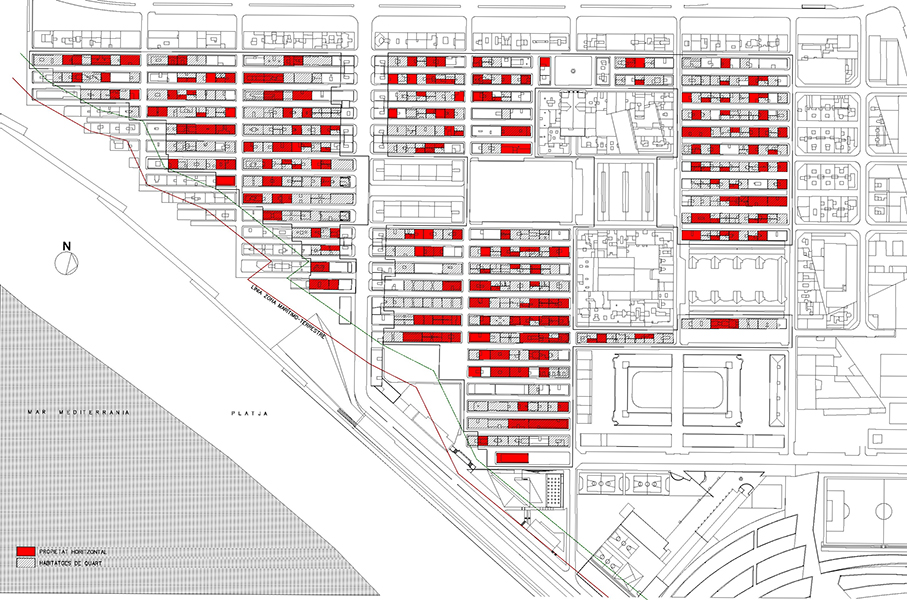 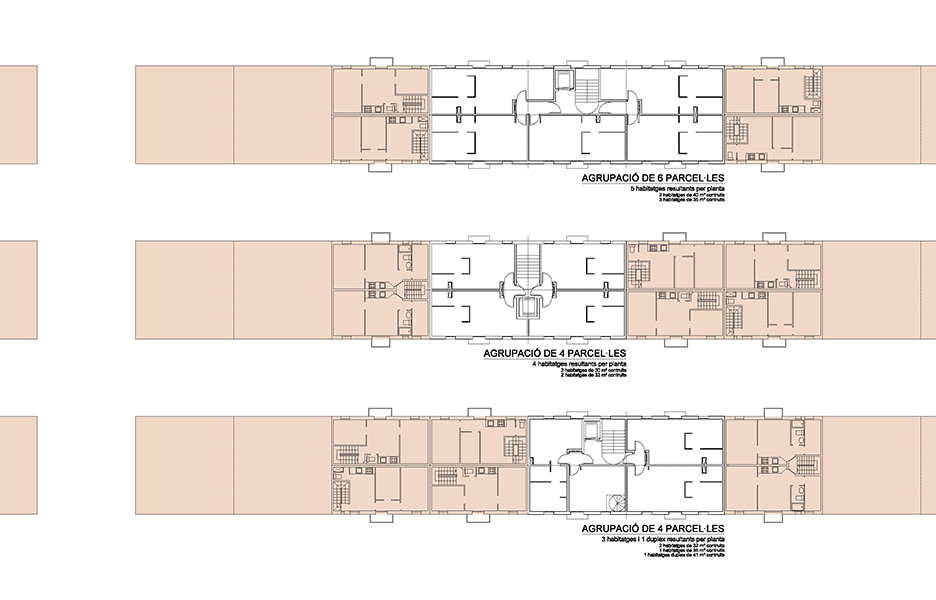 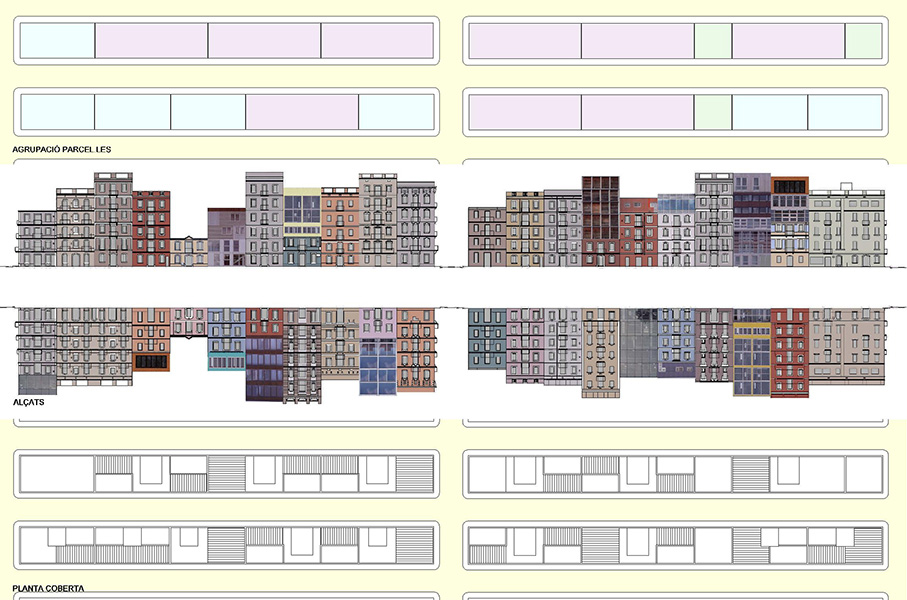 The Barceloneta district was designed by military engineers in the eighteenth century to develop the self-built settlement on the beach after much of the old Ribera district had been demolished in order to build a military citadel. It was planned according to the principles of the Enlightenment: the neighbourhood had a unitary layout, with standard dual-aspect homes with a ground and first floor. The original homes, measuring 8.4 x 8.4 metres, were subsequently subdivided, first creating a “half houses” on one floor, and later “quarter houses,” measuring 8.4 x 4.2 meters. In both cases, it was necessary to allocate a part of the available area to a minimum staircase for shared access, which provided the foundation for a subsequent and uniform process of densification in the elevation. There were about 5,000 very dilapidated “quarter homes” in Barceloneta in 2000, with 7,450 ageing residents.

The master plan aimed to renovate the “quarter homes” and encourage the refurbishment of part of the existing housing stock to achieve specific levels of functionality and quality of life, and to thereby ensure the neighbourhood’s sustainability. The plan emphasised the preservation of the physical layout of the whole neighbourhood. It was based on the need to maintain the existing urban morphology and the compact profile and size of the buildings and streets, and to preserve historic buildings.

The intervention entailed converting part of the consolidated built area into access areas and common spaces in the buildings, and therefore reducing the current number of housing units. The administration and implementation of the plan will ensure the replacement of these homes and the turnover and temporary accommodation of the population affected by the execution of the works.

The master plan envisaged defining an area for the conservation of the urban structure and renewal of the housing, which would be implemented by defining areas consisting of several quarter plots, executed by the administration systems provided for by law, and specified in action plans that would determine the conditions for the replacement of the residents’ temporary or permanent housing. These areas would be created by unitary architectural plans, regulated by a specific building refurbishment ordinance.

The consolidation of the volume also entailed the completion and treatment as a façade of the current partition walls, and the incorporation into the housing programme of the consolidated roof surfaces at intermediate heights to the greatest extent possible.

Mimetic reproduction of the traditional house was not an objective, because the preservation of the urban image would be guaranteed by the strongly defined layout and the plot structure. The aim was to facilitate the application of new technologies and construction systems, while promoting the strict conservation of the buildings and features considered valuable.

The master plan aimed to establish the necessary planning and urban development management mechanisms to rehabilitate the area in which the most “quarter” houses are concentrated, while at the same time improving their accessibility and making them more pleasant, in order to return them to their users in good condition.

Bold planning, strong public investment, and the good will of the neighbourhood’s residents were required for this intervention to be successful. The operation was unsuccessful, as only the first condition was achieved.

Building in the Barceloneta district, Barcelona